Lemuria is a continent said to have long ago been swallowed by the sea, now hidden under the Indian or Pacific Ocean. On this lost continent, some believe there once lived a race of now-extinct humans called Lemurians.

Lemuria theories first became popular in 1864, when British lawyer and zoologist Philip Lutley Sclater wrote “The Mammals of Madagascar”, observing that there were many more species of lemur in Madagascar than there were in either Africa or India, thus claiming that Madagascar was the animal’s original homeland. He proposed that the migrations were due to a now-lost landmass stretching across the southern Indian Ocean in a triangular shape. This continent of “Lemuria,” touched India’s southern point, southern Africa, and western Australia and eventually sunk to the ocean floor.

This theory came at a time when the science of evolution was just beginning and concepts of continental drift weren’t widely accepted. Many prominent scientists were using land bridge theories to explain how various animals once migrated from one place to another. Soon after, other noted scientists and authors used the principles of the Lemurian theory to study migration patterns. German biologist Ernst Haeckel began publishing work claiming that Lemuria was what allowed humans to first migrate out of Asia and into Africa. A map of the lost continent published by the Lemurian Fellowship corresponds almost exactly to boundaries of the Pacific Plate. But the map first appeared long before geologists even knew of the plate's existence.

In a book called “The Lost Continent of Mu”, one writer claimed that all of mankind has its origins in Mu/Lemuria, which once extended from Hawaii to Easter Island and Fiji. This land mass was destroyed 12,000 years ago by an enormous earthquake and sank into the sea. The Land of Mu was a huge continent situated in the Pacific Ocean between America and Asia, its center lying somewhat south of the equator. All the rocky islands, individually and in groups, scattered over the Pacific Ocean were once a part of the Continent of Mu.

The centerpiece for many Lemuria theories is Easter Island, as it contains hundreds of colossal stone statues, has written language that points to an advanced culture, yet it appeared on the world's most remote spot. The legends of Easter Island speak of Hiva, which sank beneath the waves as people fled, while Samoans called a similar place Bolutu. It was stocked with trees and plants bearing fruits and flowers, which were immediately replaced when picked. On Bolutu men could walk through trees, houses, and other physical objects without any resistance. The Maoris of New Zealand still talk about arriving long ago from a sinking island called Hawaiki, a vast and mountainous place on the other side of the water.

According to some sources, Lemurians had pliable, jelly-like bodies and slowly developed physicality. Others believe the first Lemurian subraces were more apelike with four arms, were hermaphroditic, laid eggs, and who communicated by mental telepathy. However, most sources claim Lemurians were much more like modern humans, living in an idyllic paradise, largely agrarian with lush forests and an abundance of flowers and fruit trees. They were also thought to have developed psychic and telepathic abilities. It was because of these clairvoyant abilities that the Lemurians may have been able to sense the Earth was going through a dramatic shift and were able to begin storing or spreading their knowledge across the world. Small groups would salvage part of Lemuria's precious wisdom, storing it in crystals, while others believed that if they could spread this information to as many people as possible, the wisdom would be stored even within the cells of the human bodies. 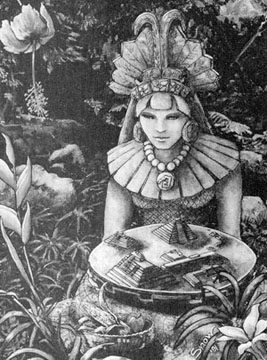 The prevailing theories of what happened to this race of beings were that when a cataclysmic event occurred some Lemurians hid inside the earth in self-contained communities while others escaped by crossing the ocean on reed rafts, using the islands as stepping-stones. It was believed that their civilization may have been large as sixty million people. Some colonists reached India and from there Mesopotamia and Egypt, while others migrated eastward to the Americas. Even traditional anthropologists are puzzled by a pre-Polynesian culture that stretched across most of the Pacific, who share astonishing similarities in village life, religion, myths, and even food sources.

Other radical geologists, who aren’t necessarily involved in the Lemurian theory, also believe in an extremely similar scenario to Lemuria. These “Catastrophists” believe a continent called Pacifica existed within the last 100,000 years, and that its rapid submersion caused mountains on the perimeter to rise, creating hundreds of volcanoes which became the Ring of Fire. Sea levels worldwide were disrupted as water rushed in to fill an enormous basin created by the sinking and caused oceans to drop hundreds of feet.

Modern science discredited he idea of Lemuria altogether due to the concepts of continental drift and plate tectonics. However, in 2013, several geologists discovered evidence of a lost continent precisely where Lemuria was said to have existed and the old theories started cropping up once again. More precise measurements of land masses and gravitational fields, indicating a thicker crust, implying a larger chunk of landmass had settled there. There are also zircon crystals of the island’s beaches surrounding the fabled Lemuria that are up to 3 billion years old, which is surprising as the islands are only approximately 8 million years old. India’s National Institute of Oceanography revealed in a study that sea level was 100 meters lower approximately 14,500 years ago, and it gradually went up because of global warming until periodic floods covered a considerable portion of the landmass. In turn, would have to the disappearance of many coastal civilizations, including Lemuria.